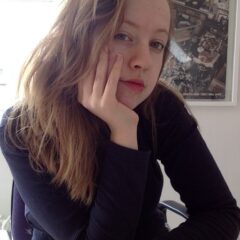 South Londoner Chloe Myerson is a writer for TV, theatre and film. She is currently developing TV projects with Roughcut TV, Filmnation and Island Pictures, and has two original TV scripts under option to Wall to Wall Television (Warner Bros.) She is also the co-founder of Monkhead Film & Theatre.

Chloe is an alumni of Channel 4’s 4SCREENWRITING Course 2020 and has been long-listed for the Old Vic 12 award, the Papatango New Writing Prize and the National Poetry Award. Her work has been performed at the Bunker Theatre, Vault Festival, the Young Vic (Freshworks) and the Blue Elephant.

Her first full-length play, DEAD SOULS at Theatre N16, received critical acclaim. Her debut film THE START OF NOTHING had its world premiere at BAFTA-qualifying London Short Film Festival, and was nominated for best lo-budget short.

‘Monkhead Theatre […] aims to bring ‘the wild rock and roll playfulness of experimental multimedia theatre’ to the Russian classic. And they have done so successfully…’ ★★★★ The Spy In The Stalls

‘One of the most ambitious fringe pieces I’ve had the joy of seeing…a very witty, contained and relevant adaptation…’★★★★ London Pub Theatres

‘A fantastic play, full of inspired touches and with fine performances.’ Fairy Powered

Chloe attended Graveney School in Tooting, before graduating with a First-Class degree from Warwick University in 2013.

Call Jonathan to discuss Chloe or other Writers