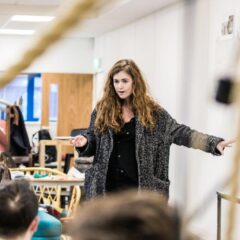 
THE FUNERAL DIRECTOR continues at The Southwark Playhouse

GROTTY runs at The Bunker Theatre until 26th may

Hannah is a freelance theatre, comedy, cabaret and musical director. She acts as Artistic Director and co-founder of all-women theatre company Damsel Productions, and has also worked as a dramaturg and script reader for organisations including the National Theatre, Soho Theatre, Paines Plough and Outside Edge.

Recently, Hannah created and co-produced outdoor festival “Damsel Outdoors”, a festival bringing outdoor theatre to audiences during the pandemic. Prior to that she directed Charlotte Josephine’s Moon Licks for Paines Plough and Royal Welsch School of Drama and Music. She also recently directed Sophie Swithinbank’s Circle Game for Oxford School of Drama, as an online production.

Earlier in 2019, Hannah  directed The Funeral Director by Iman Qureshi at The Southwark Playhouse and on a UK Tour. The play won the Papatango Award 2018 and was co-produced by ETT.

Among her prior credits as a director are Fury by Phoebe Eclair-Powell at the Soho Theatre, and Dry Land by Ruby Ray Spiegel at the Jermyn Street Theatre.

Call Jonathan to discuss Hannah or other Directors