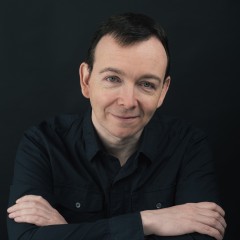 James wrote the movies SEVERANCE, COCKNEYS VS ZOMBIES, TOWER BLOCK, and also contributed script work to THE BORDERLANDS (released in the US as FINAL PRAYER). He is currently adapting the YOUNG SHERLOCK novels into feature films and is showrunning the adaptation of the graphic novel ZAYA as a TV series (Patrice Theroux/Sugar Shack Productions). His script SEQUEL is being produced in the USA by Joe Dante (Renfield Productions), to be directed by Danielle Harris.

For TV he has written episodes of programs including DOCTOR WHO (The Fires of Pompeii, which featured Peter Capaldi and Karen Gillan’s first appearance on the show in other roles), TORCHWOOD, PRIMEVAL, CRUSOE, SPOOKS and EVE. He also contributed an episode for the third season of CROSSING LINES (NBC/Tandem), for the upcoming animated series THE RUBBISH WORLD OF DAVE SPUD (The Illuminated Film Company), and action series CURFEW (Sky One) is based on his original film script.

James is represented in the US by Abram Nalibotsky at Gersh.

© Copyright The Agency (London) Ltd. 2021
Not to be reproduced in any form without permission of the Copyright holder.
Photo from Michael Gill Photography (http://www.michaelgillphotography.com/)

Call Jonathan to discuss James or other Writer and Directors