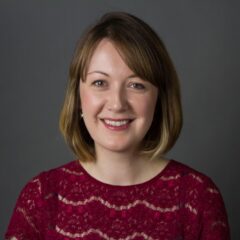 Laura is a Scottish writer based in Berlin and London.

Her original series DARKLANDS topped the inaugural Brit List 2018. Her TV project THE NIGHTS is in development with Dynamic Television and Wild Mercury for Sky Italia, and she is writing an original pilot script called OUTLAW for Wild Mercury and Sky. She is also developing THE LODGER, with Witchery Pictures.

She wrote on both series of DAS BOOT (Bavaria Studios/Sky); series 2 is coming soon. She has also contributed an episode to INTERGALACTIC (Moonage/Sky) and is writing on the forthcoming series of THE LAST KINGDOM (Carnival/Netflix).

She was named a Broadcast Hot Shot by Broadcast Magazine and won the inaugural Immersive Writing Lab prize with Blackout. She graduated from Film & Television Studies at the University of Glasgow with 1st class honours and completed an MA in Creative Writing from Royal Holloway University, graduating with distinction. She was the UK representative on Serial Eyes (serial-eyes.de), Europe’s first writers’ room training programme.

WW1 R&D
BBC
Cross-platform development with BBC Radio 4 to explore different ways they could tell the story of World War One through digital drama and interactive storytelling.

© Copyright The Agency (London) Ltd. 2020
Not to be reproduced in any form without permission of the Copyright holder.

Call Jonathan to discuss Laura or other Writers