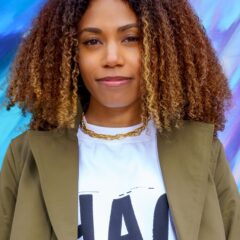 Hailing from south London, Lauren is of British-Caribbean heritage.

Her original TV series DOMINO DAY has been greenlit for BBC3, where she is also executive producer. She has recently written an episode for the second series of GANGS OF LONDON (Pulse Films/SISTER/Sky/AMC) and also wrote the harrowing Episode 6 of its first series.

She created the Bafta Nominated digital spin-off series to the BBC’s The Dumping Ground, SASHA’S CONTACT MEETING, and was named on the BBC hotlist of 200 new emerging talents tipped as future stars.

She was previously on the BBC Drama Writers’ Programme 2017, where she developed her girl-gang drama THE LOST CHIX with New Pictures and the BBC. Prior to that, her script CLEO – a gangland re-imagining of Queen Cleopatra’s story – was one of three scripts shortlisted for Idris Elba’s Green Door/Lionsgate ‘Write to Green Light’ initiative.

Lauren is currently showrunning DOMINO DAY and has other projects in early development.

Call Hannah to discuss Lauren or other Writers