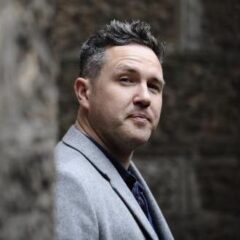 Alan is a Scottish writer for screen, stage and page (the latter represented by AM Heath).

Alan’s one man show (MORE) MOIRA MONOLOGUES won a Fringe First at the Edinburgh Festival in 2017 and was nominated for ‘Best New Play’ at the Critics’ Awards for Theatre in Scotland.  It’s a sequel to THE MOIRA MONOLOGUES, which enjoyed two sold-out Edinburgh Fringe runs, numerous tours and whose lead character was declared ‘The most charismatic character to appear on a Scottish stage in a decade’ ★★★★ (Scotsman).

In 2016 Alan’s play ONE THINKS OF IT ALL AS A DREAM toured Scotland, having been commissioned by the Scottish Mental Health Arts and Film Festival.  It’s an ‘insightful eulogy’ (The Guardian) for the former Pink Floyd frontman, Syd Barrett:

★★★★ – ‘a lovingly and intensively researched play’ –The Herald
★★★★– ‘impressive, perfectly-judged’ – The Scotsman
‘a gem…beautifully honed and truly evocative mini-drama’ – The Sunday Herald

Alan’s first play, THE CHING ROOM, a co-production between Glasgow’s Oran Mor and Traverse Theatre, Edinburgh, ran at both theatres in March 2009 to great critical acclaim. It since been revived at Glasgow’s Citizens Theatre, the Royal Exchange, Manchester and in Philadelphia.  Alan also collaborated with The Moira Monologues’ director Sacha Kyle on TURBO FOLK (Oran Mor) which was nominated for Best New Play at the 2010 Critics’ Awards for Theatre in Scotland, and BAN THIS FILTH! which was shortlisted for an Amnesty International Freedom of Expression Award in 2013. In 2012 his Edinburgh Fringe show THE RED HOURGLASS won rave reviews for its run at the National Library of Scotland and THE PURE, THE DEAD & THE BRILLIANT played to sell-out audiences at The Assembly Rooms throughout the Edinburgh Festival, and the very next month JOCK: SCOTLAND ON TRIAL was performed at the Finborough Theatre in London.

Alan’s screen credits include THE SHUTDOWN (2009), which he wrote and narrated and which won numerous awards at short film festivals all over the world, and five episodes for BBC Scotland’s flagship drama RIVER CITY.

In 2020, he presented a Caledonia TV documentary INSIDE THE MIND OF ROBERT BURNS, which was screened on BBC Scotland.

In 2016, he was awarded an Honorary Doctorate from the University of Stirling for his outstanding contribution to Scottish culture.

For his novels, Alan was named as the Glenfiddich Spirit of Scotland Writer of the Year 2011 and has twice been shortlisted for Scottish Arts Council Fiction of the Year prizes. Titles include BOYRACERS, THE INCREDIBLE ADAM SPARK, DEATH OF A LADIES’ MAN, PACK MEN and LAZY SUSAN.

Call Jonathan to discuss Alan or other Writers