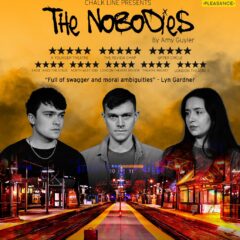 Amy’s script THE JUDE PROBLEM topped The Brit List 2020 receiving the highest number of nominations. Amy was named as one of the British writers to watch in Deadline’s TV writers The British Invasion.

In 2021, Amy was a core writer for EastEnders for BBC1 and participated in writer’s rooms for an original comedy-drama series for Leftbank Pictures and a premium streamer and a drama series for STV and Channel 4. Amy is currently writing an episode for a newly greenlit series, produced by Red Planet.

Her current original television projects include:

SUSPICIOUS MINDS
Wild Mercury
Nottinghamshire-set crime drama in which a granddaughter sets about solving the murder of her grandma as a spate of copycat killings begin.

BRENT SPAR
Studio Hamburg
Black comedy-drama about Greenpeace going up against Shell in 1995.

Amy’s play THE NOBODIES, originally staged at Vault Festival 2020 and produced by Chalk Line Theatre won the Common Award for 2020. The play is follows three working-class friends whose scheme to save the local hospital grows way beyond their control. It ran at The Pleasance Islington as part of their Edinburgh Fringe programme from 17th – 28th August 2021.

It’s difficult to find the words to sum up how incredible this performance is because it ticks all the boxes!
The Reviews Hub

Writer Amy Guyler has deftly constructed an intricate play…bold, engaging and conducted with energy and commitment.
The Guardian

Amy Guyler’s shattering Out of Stock… gently inflicts a thousand tiny cuts while we barely glimpse the blade, each one stinging with shame, helplessness, and despair at callous officialdom.
inews

Born and raised in Nottingham, Amy studied Cultural Sociology at the University of Nottingham before moving to London for a day job in TV. In 2017, she completed the BBC Doctors Shadow Scheme and has written five episodes of Doctors for BBC1. Amy was nominated at the 2019 Edinburgh TV Festival’s New Writing Awards in their Debut Writer category, supported by Big Light Productions.

She has had short plays on at the Chesil Theatre, Waterloo East, Bunker Theatre, Arcola Theatre and Southwark Playhouse and was a member of 2019/2020 Soho Theatre Writers Lab.

Call Emily to discuss Amy or other Writers