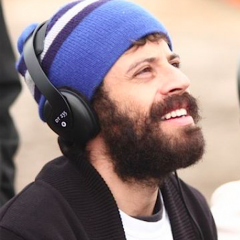 Babak Jalali was born in 1978 in Northern Iran and has been based in London since 1986.

After receiving a BA degree in East European Studies and an MA degree in Politics from the University of London, he went to London Film School where he graduated with an MA in Film-making in 2005.

His graduation film, ‘HEYDAR. AN AFGHAN IN TEHRAN’, was screened at 60 film festivals worldwide and received a BAFTA nomination as Best Short Film in 2006.

He was selected as one of the residents at the CANNES FILM FESTIVAL CINEFONDATION RESIDENCE in 2006-2007. In the residence he developed his first feature film ‘FRONTIER BLUES’.

FRONTIER BLUES  premiered in the International Competition at the Locarno Film Festival in 2009 and has gone on to screen at over 20 festivals worldwide. It won the FIPRESCI award at the San Francisco International Film Festival and was released in cinemas in the UK, Switzerland and Austria.

Babak’s second feature RADIO DREAMS premiered at the International Film Festival Rotterdam 2016 and won the Festival’s Tiger Award. It toured several other festivals worldwide, while Babak is working to put together his third feature LAND,  a modern western set in a Native American reservation.

Babak is currently writing a screenplay for Elsinore Films and an adaptation of ONE OF THE BOYS together with the author for Asmara Films, and is in pre-production on his fourth feature FREMONT.

Call Hannah to discuss Babak or other Directors & Writers

Call Ian to discuss Babak or other Directors & Writers