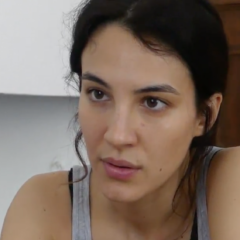 Carolina Cavalli is a writer-director from Milan working in the Italian and English language.

Carolina won the prestigious Premio Solinas Experimenta Serie prize with RAI for her original comedy-drama series Mi Hanno Sputato nel Milkshake (Rai Fiction, Premio Solinas, Tapeless Film), which she went on to co-direct. It follows Siri, a sensitive young woman struggling to find her way in an often hostile and hollow environment. The pilot first aired on RAI in December 2020 to critical acclaim “a pilot that makes you smile, that makes you feel less alone during its twenty-six minutes of irony, melancholy poetry, exasperation and fun”. Watch trailer here.

She is recipient of the San Francisco Film Society Rainin Filmaking Grant as co-writer of the feature film Fremont which is due to shoot in late 2021 (director, Babak Jalali), and her film projects are being supported by Rai Cinema, Media, MiBACT, Torino Film Commission.

Her debut feature as writer-director, Amanda, is in development with Elsinore Film and will go into production this year.

Call Hannah to discuss Carolina or other Directors & Writers