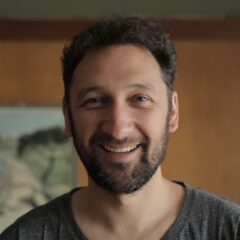 Curtis Vowell is a Cook Island Maori director who has worked in the New Zealand film industry for the last 15 years. His debut feature film FANTAIL won over crowds both at home and overseas screening at a number of international film festivals.FANTAIL was nominated for 8 New Zealand Film Awards including Best Director and Best Film and was invited to have its international premiere at Rotterdam International Film Festival. The film was also selected for the Melbourne International Film Festival, winning a People’s Choice award.

His second feature film BABY DONE with Taika Waititi and Carthew Neal’s Piki Films was recently released and stars Rose Matafeo and Matthew Lewis. In 2021 it was sold theatrically to the US and UK.

Call Nicola to discuss Curtis or other Directors