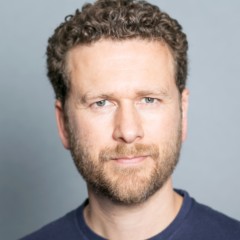 Dean studied acting at the Bristol Old Vic Theatre School. In 2011 he directed 4 ‘devised on the day’ improvised films including METRO 7 BIS which was shot in Paris and travelled to many festivals including Palm Springs Shortfest, Austin Film Festival as well as being shown on US TV. While attending PS Shortfest Dean made WHITE which was shot in one night around West Hollywood and is currently BFI’s POSTROOM PICK.

In 2014 he wrote and directed short film UNDER. Cast included Keeley Forsyth (JK Rowling’s ‘The Casual Vacancy’) in the lead role and a cameo from Daisy Ridley (Star Wars:The Force Awakens).

His most successful festival short DANIEL has travelled to 19 festivals so far, was nominated for an Iris Prize and was one of the BFI’s ’10 TO TRY’ at the London Short Film Festival 2016.

Dean recently attended the Berlinale Talent Campus 2016 and has been selected by the BFI MENTORSHIP PROGRAM and will be mentored by producer Iain Canning (The Kings Speech, Hunger, Shame).

Call Hannah to discuss Dean or other Directors & Writers

Call Ian to discuss Dean or other Directors & Writers