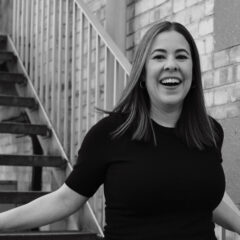 Elba is a writer and director from Puerto Rico. Elba grew up in a noisy household with four siblings where chaos was the norm — “emergencies” at every turn. It often felt like living inside a film — the genre changing every week, sometimes daily. Love was the constant through it all — an undying and relentless love.

Elba learned the fundamentals of filmmaking from New York University’s Tisch School of the Arts. She went on to complete a Post-Production Certificate in rhythm and editing in storytelling. Elba earned a Master of Fine Arts in Film and Video from the Savannah College of Art and Design in Georgia (USA), with a strong focus on directing. There, she was also awarded the Board of Trustees Fellowship. A car accident while location scouting for her thesis project left her needing to relearn a large portion of her language. Elba utilised screenwriting as the vehicle to teach herself to communicate as she had before, sitting for hours with a dictionary until she could construct the sentences that she wanted to write and say. This journey culminated in her earning a MA in Screenwriting at the National Film and Television School in 2020.

Elba’s life has taken many twists and turns. Nevertheless, through all the struggles, her understanding of humanity deepened and with it her ability to craft stories that resonate widely. Every moment has not only shaped her, but made her the writer that she is today. She loves creating magical spaces and worlds — where extraordinary things can happen and the boundaries between reality and fantasy blur. She tells stories of hope within adversity. Because at the end of the day, no matter the struggles of her life… she still believes in love, she still believes dreams can come true and she still believes in fairytales.

Elba is fluent in Spanish and English and is currently developing a variety of feature films and TV series in both languages.

Call Hannah to discuss Elba or other Directors & Writers