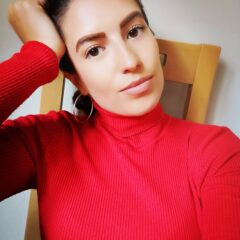 Gemma is a freelance writer and director who spearheads award-winning new writing. Predominantly, Gemma directs for stage and writes for screen.

As a theatre director, Gemma works with new writing, comedies and musicals, supporting writers dramaturgically from page to stage. Her theatre work can be identified as emotionally daring, visually dynamic and “live”. As a woman from a working-class background the need to provide platforms for under-represented voices is embedded in the fabric of her work.

As a writer, Gemma’s work explores a hybrid genre she calls feminist, gothic-giggle, with bite. Thematically, Gemma merges the mundane, the magical and the macabre. She’s fascinated by the delicious intersection between light and dark, placing gallows-humour, satire, and observational humour at the centre of her work. Screen projects include:

The Coven, a laugh out loud mockumentary following Blaze, a failing-at-life receptionist, as she spearheads a coven of outcast, millennial witches muddling from one disaster to the next.

Ghosted, a macabre, comedy-drama that trails Nikita and Tiny, two care workers turned vigilantes, who join forces to hunt down a serial “ghoster” in a thrilling game of cat and mouse

Talking To The Dead, a gothic comedy-drama, fronted by real-life sisters, Kate and Maggie Fox, as they galvanise the movement that took 19th century New York and London by storm – Spiritualism.

‘A promising debut that gets under the skin of troubled relationships… a kind of angsty Private Lives for Generation Z’ – Michael Billington, The Guardian

‘If you’re up for an hour of laughter, willing to go home sockless or just want Adolphy’s number, get yourself down to Arcola Outside.’ ★★★★ Four Stars, Everything Theatre

‘Director Gemma Aked-Priestley must be mentioned, the slick, simple direction of The Narcissist makes it stand out from small venue productions and has the feel of something bigger.’ ★★★★ Four Stars, A Younger Theatre

‘Will and Director Gemma Aked-Priestley should definitely work together again…a piece that is almost two conjoined shows and which sit together unsettlingly well.’ ★★★★ Four Stars, LondonTheatre1

‘Gemma Aked-Priestley’s production for Pan Pan has a flair for the visual […] an astringent comic sensibility and a lively theatrical imagination, brought to life by the energetic performers. […] a singular vision of a potentially difficult subject.’★ ★ ★ ★ Four stars, Irish Times

‘Feels more authentic than anything this reviewer has seen at the Fringe in years.’ ★★★★ Four and a half stars, The Reviews Hub

‘Director Gemma Aked-Priestley is very wise to give the text plenty of space to breathe…the synergy of vision between all the elements that were working together, on and off the stage, produce this very fine production’★★★★★ Five stars, London Pub Theatres

‘Gemma brings the text to life with an absolute realness, full of imaginative riches.’ Exeunt Magazine

‘The stage takes on a magical atmosphere… Such an original show deserves more credit, an imaginative step forward in helping the women of this world grow back their hands’. ★★★★ Four stars, Broadway Baby

Call Hannah to discuss Gemma or other Directors & Writers