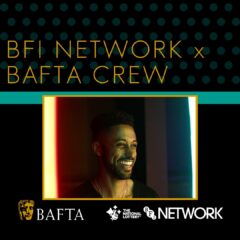 Isaac Tomiczek is a writer & director. In 2021 Isaac was a member of BFI Network x Bafta crew, The School of High Tide and BFI Network at London Film Festival, celebrating difference in approach and perspective, and seeking out filmmakers looking to disrupt conventions.

Isaac is currently a member of Out Of Joint’s Stockroom writer’s room, a diverse collective of salaried writers creating work that is challenging, relevant and popular.

He is currently writing two episodes of a YA series for Hulu and developing an original series with Urban Myth Films. Isaac’s Director showreel is available to watch here.

In 2020 his short film VACANT BASS was commissioned by Channel 4’s Random Acts as part of their Black and Proud season. Isaac directed the short film I JUST STABBED SOMEONE for BBC Teen Monologues and his play REBEL YEAH, was part of Vaults Festival. Isaac’s original feature is in development with Joi Productions.

In 2019 he was a JBA awardee, utilising the grant to develop his short film, BAPTAZIA, as a feature film. Isaac was also one of twenty international writers chosen for the UGC writers campus at Series Mania in Lille.

Isaac is Head of Film and Motion for POCC – a collective working to positively change the experience of people of colour within the creative industries.

The first two films, of Isaac’s mind-bending SHUT EYE short film trilogy have gained cult followings at international festivals and been selected as shorts of the month on multiple platforms. Both are now licensed to the online horror channel ALTER.

Isaac has twice been shortlisted for the Film London/London Calling short film awards whilst his writing and plays have been selected for competitions and festivals by Talawa, Arcola, Southwark Playhouse, Stratford Arts and Bush Theatre.

Isaac’s work has earned him a large YouTube following with clients including Universal, Sony, Beats By Dre, and Ministry Of Sound. In 2015 his video for Sam Feldt “Show Me Love” was Screen Nation nominated, and came 2nd on Promo News most viewed (behind Beyoncé).

WORTH
Industry meets Succession, a series in which a rich, idle young heiress is forced to learn the true value of money. Following the death of her father Jade learns her inheritance is only payable if she is able to build a successful, and legal, business portfolio. From scratch.

CURSE YOUR IDOLS
Horror feature film about three Oxford University students who unwittingly release a plague of increasingly strange and horrific events when they remove the statue of Cecil Rhodes from campus.

FAST CACHE
Action thriller feature set in the near future, two siblings are thrown back together and must fight to survive and defeat a dangerous cyberterrorist. Co-written with Jon Barton.

BAPTAZIA (Short Film / John Brabourne Awardee)
In a dystopian Britain where music is outlawed, a young rebel must retrieve a lost microphone to restore harmony. All that stands in her way is a man intent on destroying the mic, and a series of ancient challenges set by the gods of lyrics, dance and sound.

Call Emily to discuss Isaac or other Directors & Writers