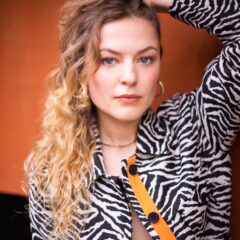 Isabella Culver is a British-American Writer, Director and Actor who grew up in South-East London. In 2020 Isabella won the ShortFLIX award run by Sky Arts and Creative England for her short film ‘SEVEN SISTERS’ a modern-day drama that follows a teenage girl as she seeks solace after a traumatic sexual assault. Isabella will direct the short which will premiere on the Sky Arts channel.

Isabella has recently been working with Bryncoed Productions on youth drama series ‘WHAT’S GOOD?’. ‘WHAT’S GOOD?’ was born from a writer’s room supported by the BFI Young Audiences Content Fund, Isabella then went on to write the pilot and treatment for the project. The Young Vic Theatre in London hosted a rehearsed reading for ‘WHAT’S GOOD?’ which was directed by Akaash Meeda.

Isabella recently directed thirty-minute short film ‘These Four Walls’ written and starring Callan Allen. ‘These Four Walls’ explores male mental health in the time of lockdown, a subject very close to her heart. As well as directing drama Isabella also directs music videos, in the past year she has worked with many up-and-coming artists including OSOM, Catching Cairo, Jean Mikhael and Achorsong.

Isabella studied theatre at The BRIT School and went on to receive a 1st Class BA in Creative Writing from Bath Spa University. After graduating Isabella acted as Assistant Producer during an internship with immersive theatre company ‘RAUCOUS’ under Artistic Director Sharon Clark. During her time at Bath Spa she participated in the Creative Thinking Competition and was selected to be part of The Hot House Collective run by Ark Data Centre’s. She worked with them over the course of six months to develop ideas for VR and Brainwave reader games to be used in schools for children with learning difficulties.

AS DEAD AS IT GETS
60′ TV pilot
Bryncoed Productions
Writer

AS DEAD AS IT GETS
Bryncoed Productions
Writers Workshop

Call Nicola to discuss Isabella or other Directors & Writers