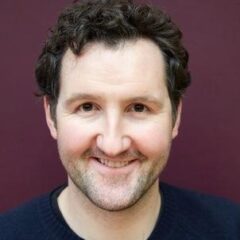 John Hollingworth is a writer for stage and screen.  He comes from West Yorkshire and much of his work is set there.  His first full-length play, MULTITUDES, played at the Kiln Theatre in February/March 2015 under the direction of the theatre’s Artistic Director, Indhu Rubasingham.  He was subsequently awarded attachments to the National Theatre Studio and Leeds Playhouse in 2016.

Later that year John was commissioned by Paines Plough to write a play about Otley as part of their COME TO WHERE I’M FROM season and he performed a new solo piece of his at Leeds Playhouse as part of the ‘Furnace’ New Writing Festival.  John has also staged his work at the Soho Theatre, the Arcola and Tristan Bates Theatre.

In 2018 he worked with Out of Joint to edit material from Andrea Dunbar’s RITA SUE AND BOB TOO and THE ARBOR into a single new version of the latter, which toured nationally and ran at the Royal Court in January 2018.  He was then commissioned by Sheffield Theatres to originate and write the book for a new community musical SONGS FROM THE SEVEN HILLS, which played on the Crucible main stage to packed houses in 2018.

He has had treatments commissioned by Shoebox Films and Tod Productions/ STV.

He is a graduate of Trinity College Dublin and the University of California Los Angeles.  As an actor John is represented by Kat Oliver at Conway Van Gelder Grant.

Call Jonathan to discuss John or other Writers