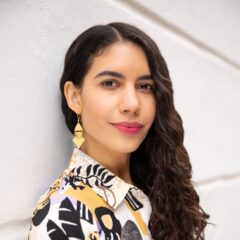 Karla is a British-American writer and actor who works across both stage and screen. A former BBC Production Trainee, she gained extensive experience in TV and radio before getting her start as a professional writer when her six-part mystery thriller was optioned by ITV Studios and she was invited to co-develop a series for Lime Pictures.

She has been part of several writers’ rooms, including the room for BBC/Netflix teen drama GET EVEN, and has written seven episodes of long running drama HOLLYOAKS. Her special unconscious bias episode of the show was lauded by both viewers and critics alike, the news media hailing it the show’s “best ever episode.”

Karla’s debut play LEAVING opened at The Bunker Theatre in 2019, and is set to be transferred to the Pleasance Islington for a full run in early 2022. Karla starred in and co-produced the show alongside her emerging company Dead Good Theatre.

Karla is currently under commission with the National Theatre, BBC Radio and the Royal Exchange, where she is playwright on attachment. She is also co-writing a TV drama set in Tower Hamlets and is currently working on her debut novel.

As an actor, she is represented by Lucy Middleweek at Middleweek Newton and her literary agent is Ben Dunn at DunnFogg.

Call Jonathan to discuss Karla or other Writers