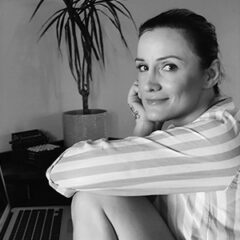 Raised in North London, Kat de Naoum knew she wanted to be a writer since the age of nine.

Her writing career began in her teens where she worked as a staff writer at the local paper and, after spending her 20s in several different job roles—paralegal, travel agent, PA, barwoman—her freelance writing career kicked off in her 30s. She has written for many magazines and news media outlets including InStyle, Real Simple, Shape, Mother & Baby, Parents, Bust and The Debrief.

Kat splits her time between the UK and Greece with her partner, their offspring and several pets. When she’s not writing, studying for her English Lit degree (better late than never) or taking care of the household, Kat likes to read, watch TV shows, do Pilates or yoga, lounge on the beach (or anywhere near water) and catch up with friends.

She’s currently writing a YA novel about growing up in a strictly religious community, based on her own childhood experiences.

Call Jessica to discuss Kat or other Authors