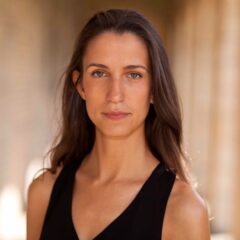 Katerina is currently writing on Death in Paradise and has written the finale episode for the 25th anniversary series of Silent Witness, due to air in June 2022.

She was previously one of eight writers chosen for The BBC Writers’ Academy 2019 – which includes a commission for Holby, Eastenders and Casualty as well as the development of an original TV series. She has also participated in BBC Studios Scripted Disability Mentoring Programme, where she was mentored by Ceri Meyrick.

Her work was first developed by The National Theatre and performed at the NT Studio as part of Aftershocks. In 2019, her play Chateau Marmont was produced by award-winning theatre company Nouveau Riche and she was a resident playwright at The Rosemary Branch. Her writing has also been staged at The Arcola, The Roundhouse and The Box Theatre, Toronto.

Call Emily to discuss Katerina or other Writers