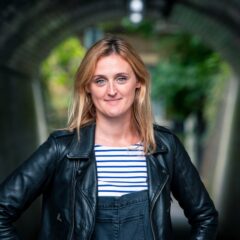 Kirsty is a Director and Dramaturg and took part in the National Theatre Studio Directors Course in 2015. She has been shortlisted for the JP Morgan Emerging Directors award and was a finalist for the JMK Young Directors Award. She was also Dramaturg on SHEBEEN by Mufaro Makubika, which won the 2017 Alfred Fagon Award.

In 2019 Kirsty opened the world premiere production of Mischief Theatre’s GROAN UPS at the Vaudeville Theatre in London’s West End. It is currently touring the UK and will be produced internationally in 2022.

Notable previous productions include Kirsty’s revival of her own hit production of Joy Wilkinson’s play THE SWEET SCIENCE OF BRUISING at Wilton’s Music Hall. After receiving four stars from The Times and five stars from The Daily Express and being nominated for an Off West End Award for Best New Play during its initial run at the Southwark Playhouse, it has gone on to receive a number of four and five star reviews.

Prior to that her show CHEF, written by Sabrina Mahfouz ran at the Soho Theatre 2015 starring Jade Anouka. During its run at the Edinburgh Festival in 2014, it was announced as one of the first six winners of a Scotsman Fringe First Awards and received glowing reviews.

PEOPLE LIKE US – 2012
by Jake Brunger
Director
Pleasance Theatre, London

Agents: Simon Blakey and Jonathan Kinnersley @ The Agency
Copyright The Agency (London) Ltd. – 2021
Not to be reproduced in any form without permission of the Copyright holder.

Call Jonathan to discuss Kirsty or other Directors

Call Simon to discuss Kirsty or other Directors