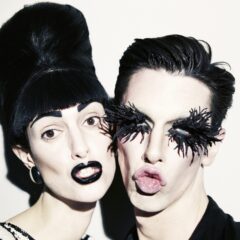 As Bourgeois & Maurice they have performed at the Royal Opera House, Southbank Centre and Sadler’s Wells and regularly appear at Soho Theatre in London. They have produced and toured seven full-length theatre shows; Social Work (2009), Shedding Skin (2010), Can’t Dance (2010), Fa La La La La / Started A Band (2011), Sugartits (2012) and Middle of the Road with David Hoyle (2014), as well as curating and hosting their own mixed-bill night Shindig. Currently they are on tour with their Edinburgh Fringe hit How to Save the World Without Really Trying (2016).

Liv and George are currently working on a seed commission of a musical for Birmingham Rep, called Graham Price Superstar – their first co-written theatre work for other characters. They are Associate Research Fellows at Birkbeck, University of London.

Reviews for How to Save the World Without Really Trying at Edinburgh Fringe 2016:

★★★★ “Black, kitschy, current and witty, this is a sublime show” The Skinny

★★★★ “A gloriously sarcastic hymn to our need, greater than ever, for alternatives”  The Guardian on Middle of the Road (2015)

★★★★ “It’s hard to think of any other act delivering such clever, funny and sharp material” Time Out on Sugartits (2012)

Call Tanya to discuss Liv or other Writers