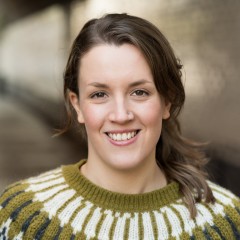 BARBARIANS
Olivier Nominated for Outstanding Achievement in an Affiliate Theatre
‘Like a furious, punk Godot- Confidently directed…Stevenson makes the most of the play’s muscularity and her youthful cast bring out its gallows humour as well as its bleakness.’ **** (The Guardian)
‘Across the plays, Stevenson’s stripped-back production builds to its final scenes like a clenched fist waiting to punch.’**** (The Stage)
‘playful and inventive’**** (Time Out)

LANCASTRIANS
‘Director Liz Stevenson has skilfully woven the narrative out of rich reminiscence, sometimes dark despondency, but all with a hefty helping of native humour.’ (Lancashire Life)

A CHRISTMAS CAROL
‘With marvellous attention to detail evident throughout, this show is a perfectly polished little jewel’ **** (The Stage)
‘memorable and joyous’ ***** (Arts Scene in Wales)

Call Maeve to discuss Liz or other Directors

Call Nick to discuss Liz or other Directors