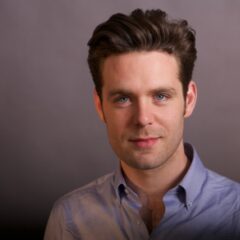 SO HERE WE ARE opens at the Manchester Royal Exchange

The Bruntwood Prize For Playwriting 2013

Luke Norris is a writer of stage and screen. His professional debut GOODBYE TO ALL THAT was performed at the Royal Court and was widely acclaimed; the Telegraph commented that ‘we’re in the presence, unquestionably, of a playwright of major promise’. His next play SO HERE WE ARE, won a Bruntwood Judges Award and was nominated for two Manchester Theatre Awards. It debuted at High Tide Festival in September 2015 before transferring to Manchester Royal Exchange.

His third play GROWTH was performed at the Gate Theatre, the Royal Welsh College of Music and Drama and the Edinburgh Fringe 2016 in Paines Plough’s Roundabout Theatre, where it won a Fringe First before heading out on a UK tour. It toured again with Paines Plough in September/October 2017.

Luke’s latest play was written under commission to the Bush Theatre, and he is writing a new play under attachment to the National Theatre New Work Department.

Luke has also written for the National Theatre Connections (HEARTS), which played at the Sheffield Crucible and the Shed Theatre at the National.

For TV Luke writes drama and comedy and has had original ideas under option to Lovely Day and Hat Trick. He was selected to participate in the Channel 4 Screenwriting Course 2014, which led to his original drama script AUTUMN.

His debut radio play for BBC Radio 4 THE COMING TIDE was broadcast in 2017.

GROWTH
March/April 2015
Commissioned by Paines Plough and Royal Welsh College of Music and Drama
Performed at RWCMD and at The Gate Theatre, London
Directed by Sean Linnen

HEARTS
National Theatre Connections 2014
Performed at the Shed Theatre at the National in July 2014.

GOODBYE TO ALL THAT – 2012
The Jerwood Theatre Upstairs

JESUS AND THE JETPACK
Feature Film
With director Lucy Tcherniak.

SPARKS
Short Film for the NFTS

NIGHT OF THE FOXES
Short Film
With director Tom Haines

Call Jonathan to discuss Luke or other Writers