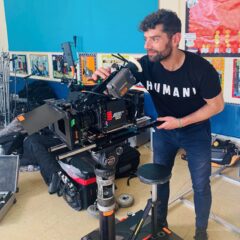 Mario Theodorou is an award-winning writer, director with an eclectic body of work across both drama and comedy.

He first came to prominence when his comedy-drama series Conny was co-optioned by Merman and Bwark and put into development.

He was then selected for the BBC Drama Writer’s Programme and was named on the BBC Hotlist of 200 emerging talents tipped as future stars.

He went on to gain a BBC commission for his drama series Coward before releasing The Cyprus Missing on BBC Radio 4 and BBC Sounds.

His short film Anonymous picked up numerous awards on the international film festival circuit, including a nomination for the short film award at the Oscar-qualifying Austin Film Festival.

Mario has recently written and directed The Gifted Hypothesis due for release at the end of 2021, and his feature film King of Crime is slated for production in 2022.

Mario is currently working on several projects in development with leading production companies and broadcasters, including his anthology series Untold Epics and he is also part of the prestigious BFI Network x Bafta Crew cohort for 2021.

Call Emily to discuss Mario or other Directors & Writers