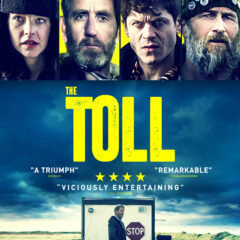 Matt’s debut feature THE TOLL premiered at Glasgow Film Festival 2021 and released internationally in September. Produced through Ffilm Cymru Wales’ Cinematic scheme, The Toll is described by GFF as “mixing the dark comedy of the Coen Brothers with the antihero of Sergio Leone’s spaghetti westerns… a madcap chain of events that lead to a showdown of epic proportions”. It is now available to watch on Amazon Prime.

Produced by Mark Hopkins for Western Edge Pictures, and directed by Ryan Andrew Hooper. The film is a development of Matt and Ryan’s Ffilm Cymru Beacons short film Ambition, which starred Simon Russell Beale and premiered at Dinard Film Festival in 2019.  The filmmakers are currently developing black comedy feature The Life and Death of Daniel Dee with the support of Ffilm Cymru.

The chance to watch [Michael] Smiley in a rare lead role as the wry, watchful presence at the centre of his very own shaggy dog story.”
RADIO TIMES

Matt is also currently developing an original Welsh crime series for Bad Wolf, has another original series in development with Who’s On First entitled A COUNTRY THE SIZE OF WALES and is working with Severn Screen on a new series.

In 2019 Matt was selected to join the Edinburgh International Film Festival Ideas Lab as one of eight screenwriters selected from across the UK.

Previous work includes an iPlayer episode of CASUALTY for the BBC, and sci-fi short films SILENT PHANTOM and THE PLACE OF MY BIRTH, which won Best Short at the Royal Television Society’s West Awards in Bristol in March 2017.

Call Emily to discuss Matt or other Writers