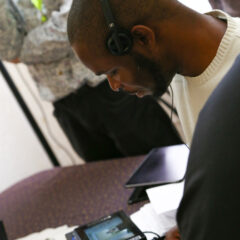 Nosa Igbinedion is a British-Nigerian filmmaker who is currently under commission to write on a podcast series for Storypunk. Nosa was also recently commissioned by the BBC and BFI  to write, and direct ‘Binge Watching’ a social realist sci-fi short that was broadcast on BBC 4 and I player.

His shorts have won multiple awards and featured in notable film festivals around the world (London short film festival, AFRIFF, Rain-dance among others) and in 2015 he was awarded the ‘Rising Talent’ Screen Nation award.

As a pioneer of the new Afro-futurism movement, he created the 1st African super-heroine universe,  ‘Rise of the Orisha’. The proof of concept film went viral, garnering over a million views online and was featured in international publications such as O Globo and BBC worldwide.

Nosa is an ex Astrophysics student, so it’s no coincidence his work is interested in Futurism, Tech, Social Realism and Spirituality.  He is a cross-platform creator; Nosa is currently developing multiple feature films, a TV series and graphic novel set in his created universe and a VR installation.