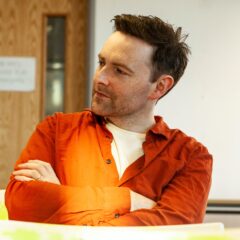 Padraic is a playwright, screenwriter and fiction writer.

BLUE THUNDER sold-out its three-week run at the VAULT Festival in 2019 and won the Innovation Award. A second production ran at the 19th TREND Festival in Rome, an annual festival showcasing ‘New Frontiers in British Theatre’ curated by La Repubblica’s theatre critic. It was also adapted for BBC Radio 4 and was The Times’ Radio Pick of the Week, The Guardian’s Audio Pick of the Day, and chosen for the BBC’s Drama of the Week podcast.

FOXES was broadcast on BBC Radio 4 and was shortlisted for Best Original Audio Drama at the 2018 BBC Audio Drama Awards and chosen for the BBC’s Drama of the Week podcast.

His original TV comedy-drama MAN & WIFE (6x30min) was in development with The Forge.

He also won the Walter Swan Trust Playwriting Award in 2015, was 2017-2018 Writer on Attachment with the Oxford Playhouse and was shortlisted for the Channel 4 4Screenwriting attachment in 2019. He has received a Peggy Ramsay Foundation Grant. His fiction has appeared in The Stinging Fly and Cyphers.

THE MARQUIS OF GRANBY
Camden’s People’s Theatre
Dir. Helen Broughton
An audio play mapped to a walk. Part of the CITY project for the 2013 Spirit Festival

Call Nick to discuss Padraic or other Writers