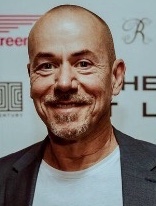 Philip spent his childhood and teenage years in York. Having left home at 16 he was rescued by the city’s alternative community and found freedom living as a cross-dresser in a squat full of drag queens. He settled in London where, in Kensington Market, he sold fetish gear to the likes of Boy George, Pete Burns and Marilyn.

After running a gay hotel in Paddington for many years, Philip started a family. He set up his own successful business which he sold 20 years later. Moving to the Caribbean, he intended to retire in the sun. But something was missing.

Back in London, Philip retrained and worked in the NHS. After a decade, during which he witnessed the reality of life on the front line, he left to write full time. As well as a screenwriter, he is also a published poet.

While Philip’s writing is character centred and emotionally engaging, it is equally commercial, lean and hard hitting.

A white van man and his best friend since childhood, who’s also a trans woman,
take a trip to make the money for reassignment surgery – one last trip as mates
before they’re man and wife.

GB was a featured script on The Brit List, 2018

A fledgling super-model and her newly famous rock guitarist boyfriend are lost
souls, each the other’s shelter from a rapacious world. When he dies in a tragic accident, her grief begins to manifest around her in terrifying ways.

MISTAKEN – Conspiracy Thriller/Woman On The Run

The victim of an identity theft is arrested for a political assassination. Sprung
from custody by her exact double, she in turn escapes. To stay alive, and clear
her name, she must stay one step ahead of her deadly doppelgänger.

1980. John Lennon flees New York for County Mayo, intending to return to the
island in Clew Bay he bought in the 60s at the height of his fame. He is so many miles now from love and home. This is the story of his strangest trip.

A working class girl gets a job in a super rich household. After she foils a
robbery at work, she sees how much power nannies could have. She and her
new nanny friends turn Robin Hood and set about levelling the playing field.

DO NO HARM – Treatment; based on spec script. Crime/Hospital Drama

When a terrorist suspect is brought into A&E after a road accident, the police lock down the hospital. A top surgeon, blackmailed by her anaesthetist ex lover, is drawn into a drug dealing operation he runs from the heart of the hospital.

Call Emily to discuss Philip or other Writers