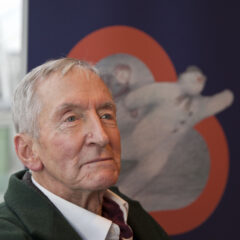 Raymond is a much loved illustrator, cartoonist and author. He is best known for The Snowman which was adapted as an animated film in 1982 and continues to be shown on Channel 4 every Christmas along with the more recent The Snowman and the Snowdog.

His other works include When the Wind Blows, The Man, Father Christmas, The Bear and Fungus the Bogeyman. Pins and Needles have toured a theatre production of The Bear and the Lyric Hammersmith’s production of Father Christmas has been an annual feature for several years now. Fungus was made into a four episode series for Sky in 2015 starring Timothy Spall and Joanna Scanlan. Ethel and Ernest was adapted for the screen and released in October 2016.

Raymond was appointed CBE in 2017 for services to literature.

Time For Lights Out was published by Jonathan Cape in 2019.

‘It’s a category-defying rag-bag of drawings, poems and observations, jokes, snippets of autobiography, quotes on death from writers and philosophers. All human life – and death – is here in this lucky dip of memories and fears, irritations and idle thoughts.’

‘By the nature of its subject matter, Time for Lights Out is gloomy, but for some reason not dispiriting. Glimpses of beauty, humour and generosity keep shining through and, as always, Briggs’s drawings have a touch of magic about them, conjuring human beings and their foibles out of a few precious lines.’ Craig Brown, The Mail on Sunday

‘Grimly amusing and unsparing of detail, he charts this new life journey with resignation on one page, incredulity on another, irritation on a third and mordant humour all the way through’ Nicholas Tucker, The Times

One of the book’s drawings, of Raymond’s parents Ethel and Ernest’s breadboard and knife, ‘is so serenely exquisite that it might as well be by Morandi’ Rachel Cooke, The Observer’s Graphic Novel of the Month

Call Hilary to discuss Raymond or other Authors & Illustrators

Call Jessica to discuss Raymond or other Authors & Illustrators