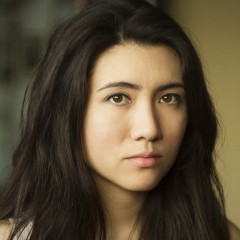 Rebecca trained as an actor at East 15 Acting School and is a graduate of the Royal Court’s Young Writer’s Programme. She is currently a member of BBC Writers Room’s London Voices group.

She recently wrote the drama LOCUSTS under commission to Audible, that was released as part of their ‘GNR8T’ strand, in association with LAMDA: link.

Rebecca wrote, produced and starred in her comedy web series Jade Dragon, a 19-episode mockumentary set in a Chinese takeaway. Jade Dragon was nominated for an ‘Outstanding Achievement in Writing’ award at NYC Webfest. All 19 episodes are available on Youtube:

Her first play Zoo Lodge premiered at The Pleasance Dome at Edinburgh Festival in 2011. Since then she has written hundreds of short plays for The Matey Institute’s One Hour Plays.

With her production company Jackdaw, she recently made a horror web series, Sleep Tight.

Her play The End was part of Little Pieces of Gold’s ‘Women in the Arts’ festival at the Canal Café Theatre in March 2018. Her play ‘A Good Ten Years’  made the Bruntwood longlist.

Copyright The Agency (London) Ltd. – 2018
Not to be reproduced in any form without permission of the Copyright holder.

Call Jonathan to discuss Rebecca or other Writers