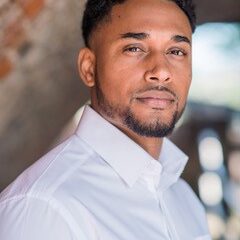 Film, Television & Theatre have always been a huge passion throughout Rem’s career with his first theatre production spring-boarding him into the industry. In 2011 Rem wrote, produced and directed his first stage play which birthed his theatre production company the Conway Network. Seven productions later and Rem had a huge desire to step into Film and Television, with the aim of becoming a Producer and bringing diverse and regional stories to the screen, as well as bridging the gap between grass-root talent and the wider industry. Since making this step he has worked in a variety of roles in scripted drama working in both development and production departments.

Rem’s primary aims are to 1) produce stories for and from underrepresented audiences with a drive to educate, inform or inspire. 2) to bridge the gap between grass-root talent/creatives and the wider industry; encouraging collaboration, progression and innovative work.

Call Nicola to discuss Rem or other Directors, Producers & Writers