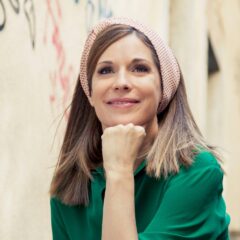 Ruth Borgobello is a director/writer for film and television.

Ruth’s debut feature film, THE SPACE BETWEEN was Australia’s candidate for Best Foreign Language Film at the 2018 Academy Awards.

Passionate about forging links between Australia and Italy, Ruth created the first official co-production between the two countries with THE SPACE BETWEEN, starring Flavio Parenti and Maeve Dermody. The film premiered at the Rome International Film Festival and had its theatrical release in 2017, in 31 cities across Italy and 5 cities in Australia.

Ruth currently works between Australia and Europe and is developing her next feature film in Italy, NIGHTFLOWERS with the support of the FVG Film Fund, Italy and two original television dramas as well as the screen adaptation of a best-selling Australian novel with Aquarius Films.

Call Hannah to discuss Ruth or other Directors & Writers