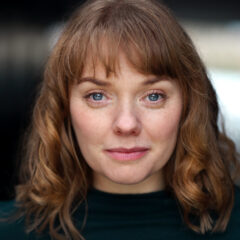 Samara MacLaren is a writer and actor. She was part of the BBC’s 2018 Drama Room Scheme and was selected as one of the BBC’s Scottish Voices for 2019. Her debut play, Ailsa Benson is Missing premiered at the 2018 Edinburgh Festival and was shortlisted for the Scottish Theatre Awards and a Filipa Braganca Award.

“Beautifully wrought… a character study with real bite, meditating on the male gaze” ★★★★ The List

“Directed with a strong understanding of the nature of innocence by Marilyn Imrie, MacLaren’s script explores that age of passion and angst with real understanding.” ★★★★ The Stage

“Striking just the right balance of humour and sincerity, this debut play will surely not be MacLaren’s last.” ★★★★ The Skinny

“A strikingly insightful piece… it sweeps the audience along on a journey through love, loss, misunderstanding and purpose. A wonderful debut and an absolutely essential play to see this Fringe.” ★★★★★ The British Theatre Guide

Her other writing work includes; Father and Son, a ten-part detective series for BBC Learning; a short film script Adulting, which was shortlisted and commissioned in 2017 as part of The Break for BBC Three; and Bun, a short play which was performed by Stellar Quines as part of an event for 2017 International Day of the Girl.

Copyright The Agency (London) Ltd. – 2021
Not to be reproduced in any form without permission of the Copyright holder.

Call Jonathan to discuss Samara or other Writers