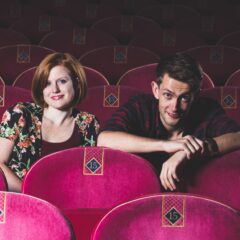 
OOR WULLIE is at Dundee Rep!

Scott is one half of the the award-winning musical theatre writing partnership Noisemaker, along with Claire McKenzie. Currently showing is OOR WULLIE at Dundee Rep:

The show is a co-production with Selladoor. You can book tickets here: link. After Dundee, Wullie will head off on a tour of Scotland.

Both Claire and Scott trained at the Royal Conservatoire of Scotland. Their first project as a duo, FREAKSHOW, had an initial run in Glasgow then transferred to London where it was awarded the Daily Mail Drama Award 2012. A run at the Edinburgh Festival Fringe followed. Now six years on, Noisemaker have worked across the globe, from Berlin to New York, Chicago to Glasgow.

In 2016, they were selected by Walt Disney Imagineering and NMI Inc. as their New Voices. In the same year their show FOREST BOY was chosen as a Next Link Award Winner by the New York Musical Festival (NYMF), making them the first Scottish writing team to ever be selected which has led to collaborations with organisations like the National Youth Music Theatre, the American Musical Theatre Project at Northwestern University in Chicago, The National Theatre of Scotland, Goodspeed Musicals in Connecticut, Mercury Musicals, The Sheffield Crucible Theatre and The Royal Conservatoire of Scotland.

In 2018 Noisemaker won a Fringe First for MY LEFT/RIGHT FOOT, co-written with Richard Thomas and produced by the National Theatre of Scotland with Birds of Paradise. The show then toured, and transferred to Japan. They also created the Christmas show for Dundee Rep that year, a new version of THE SNOW QUEEN.

Most recently, Noisemaker received a Scottish SME Business Award for their work and innovation as a writing partnership. The award was for Unique Scottish Business 2018 and marks the first time an arts organisation or partnership has been acknowledged by this sector.

2019 saw Noisemaker return to America, firstly for a seven-week residency with the American Musical Theatre Project at Northwestern University in Chicago, developing a new version of their ‘choose-your-own-adventure’ musical; THE GIRL WHO. The pair then returned to Connecticut for the premiere production HI, MY NAME IS BEN at Goodspeed Musicals, in partnership with Dundee Rep.

Call Jonathan to discuss Scott or other Writers