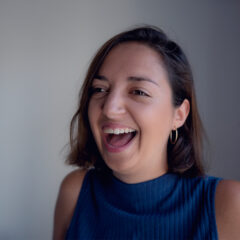 Sonia is a writer and theatre maker from Manchester.

Her debut solo show, Happy Birthday Without You, toured to Kiln Theatre and Paines Plough’s Roundabout at the Edinburgh Fringe and she has devised and written a number of community theatre shows with companies such as Company Three, Kiln Theatre, Donmar Warehouse and Hull Truck.

She is currently on attachment with Kiln Theatre as part of ETT’s Nationwide Voices and has recently completed a year on the Royal Court’s Long Form Writer’s Group 2020. She was a member of BBC Writersroom Comedy Room 2018 and has since written for a number of CBBC and CBeebies shows including Class Dismissed, Justin’s House and Biff and Chip.

She is currently co-writing a new audio comedy-drama for Whistledown Productions and Audible and is under commission with HighTide and the Royal Exchange Theatre.

Call Hannah to discuss Sonia or other Writers