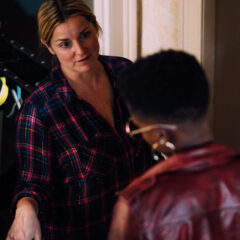 Stephanie is an award winning, BAFTA long-listed filmmaker. She is the creator, director and EP of comedy horror HOUSE HACK, a live-action interactive feature film commissioned by Whatifi, the social story-hacking platform for original interactive films. HOUSE HACK was produced under her banner FORGE FILMS, which she founded in 2017. The film features Ann Akin, Amer Chadha Patel and Jenny Funnell. It launched on the Whatifi platform in March 2021 to great success and was voted a Top Game App 2021 by Google Play. Watch the HOUSE HACK trailer HERE.

ZEBRA GIRL is Stephanie’s feature directorial debut which she also co-produced and developed the screen story for from the critically acclaimed Edinburgh Fringe one woman show ‘Catherine & Anita’ performed by Sarah Roy. Starring Tom Cullen, Jade Anouka and Roy, it was released in UK Cinemas in May 2021 and is now streaming on all major VOD platforms. Sales are with AMP International. Front Row Filmed Entertainment and Bohemia Media are distributing.

IN OUR BLOOD is her third feature and has been developed with support from BFI/Creative England, receiving an Emerging Talent Award in 2017. The screenplay was a semi-finalist in the Shore Scripts feature competition out of 2,500 submissions. The project received further development through the 2017 Birds Eye View/BFI FILMONOMICS programme and 2018’s EIFF Talent Lab and Galway Film Market. In 2018 she received the John Brabourne Award to support script completion.

Stephanie is currently in development on her third feature film, IN OUR BLOOD, a modern gothic psychological horror, for which she was awarded Creative England/BFI Emerging Talent Development Funds. The screenplay was a semi-finalist in the Shore Scripts feature competition out of 2,500 submissions. The project received further development through the Birds Eye View/BFI FILMONOMICS programme, EIFF Talent Lab and the Galway Film Market. She was also awarded the prestigious John Brabourne Award to support script completion.

She has over 15 years industry experience, firstly as an actor, then as a successful First Assistant Director and Promo Producer before concentrating on directing and producing her own projects. She has worked alongside top tier talent, broadcasters and production companies including Netflix, BBC, BFI, Channel 5 and Sky Vision and is in development on several film and TV projects. She is a member of BAFTA, Directors UK, WGGB and holds dual UK/US citizenship.

Call Nicola to discuss Stephanie or other Directors & Writers