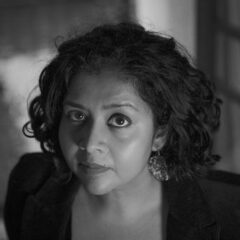 Suba Sivakumaran is a self-taught director who was born in Jaffna, Sri Lanka.

Her first short film I TOO HAVE A NAME (Sri Lanka, 11 min) was in competition for the Golden Bear at the 2012 Berlinale and was selected in competition at over 25 film festivals worldwide.

Her second short film L’OISEAU BLEU (Tunisia, 15 min), as a co-director, was shown out-of-competition at Director’s Fortnight, Cannes 2018 as part of the anthology TUNISIA FACTORY, and selected for Clermont-Ferrand Film Festival among many others.

Suba also works in the area of international humanitarian aid and poverty reduction and is currently developing her second feature film, a thriller set in London about refugees on the eve of Brexit. She is based in London.

Suba has a B.Sc. Honours in Government and Economics from the London School of Economics (2002) and a Masters in Public Policy from Harvard University (2008) where she was awarded a full scholarship as a Reynolds Fellow.

Call Hannah to discuss Suba or other Directors & Writers