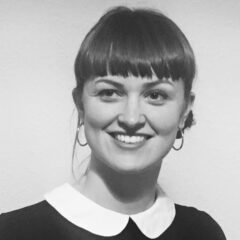 Tabitha is a writer based in London. Her work for theatre has been performed at venues across the UK including Bristol Old Vic, Theatre503, The Wardrobe Theatre and The Park.

Her most recent theatre script DAFFY GROD AND THE SHAKING LIGHTS was shortlisted for the Papatango Prize and longlisted for the Bruntwood Award. Her latest production THE AMBER TRAP ran at Theatre503, directed by Hannah Hauer-King and produced by Damsel. Her previous play BEACONS ran at The Park and picked up nominations for three Off West End Awards including Best New Play and Most Promising New Playwright. It has since been produced at The Devonshire Park Theatre in Eastbourne. Her first play BILLY THROUGH THE WINDOW was shortlisted for the Brighton Fringe Excellence Award.

In 2020 she was named runner up in the Alpine Fellowship Theatre Prize; in 2021 her script KISSING RICE was shortlisted for the inaugural Hope Playwriting Prize, and later that year her original seven-part audio drama LIFE SENTENCE was produced by Mags Creative and won the Gold Award at the ARIAS 2022 for Creative Innovation.

She is currently developing an original drama series with Audible.

Call Jonathan to discuss Tabitha or other Writers