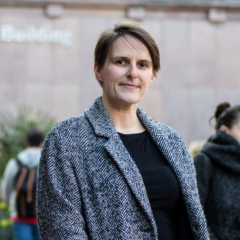 Zoe is a playwright. Her latest play THE KISS was performed as part of the Orange Tree Theatre’s Inside/Outside Series in April 2021.

Her previous play OUT OF WATER also played at the Orange Tree Theatre in 2019. It was produced in association with the RSC. OUT OF WATER was named as a finalist in the 2020 Susan Smith Blackburn Prize. It was also shortlisted for the Charles Wintour Award for Most Promising Playwright at the Evening Standard Awards 2019, and nominated for the ‘Best New Production of a Play’ Award in the Broadway World UK Awards.

Praise for OUT OF WATER:

“Captivating… Whatever it is that distinguishes rare writing talent, Zoe Cooper has got it. ★★★★” The Guardian

“With a tang of authenticity and a powerful emotional undertow beneath its gently eddying surface, Zoe Cooper’s new play is a stealthy enchantment. A tale of gender, love, myth and motherhood drenched in the bracing brine and ozone of the Tyneside coast, it has a dreaminess that drifts through the ebb and flow of life in a small community…Out of Water is poetic, rich and strange; it’s also beadily observed and sharply funny. ★★★★” The Times

Her play JESS AND JOE FOREVER won her the Most Promising Playwright Award at the Off West End Awards 2017 and was longlisted for the Evening Standard Most Promising Playwright Award for its production at the Orange Tree. It then went on a UK Tour, played at the Traverse during the Edinburgh Festival 2017, and was revived at the Stephen Joseph Theatre in Scarborough in 2018.

Praise for JESS AND JOE FOREVER:

★★★★ “This is a small play with a big heart, a romantic comedy that’s genuinely funny but also unexpectedly powerful.” Henry Hitchings, Evening Standard

★★★★ “The lightness of touch and splashes of humour quietly, charmingly, deftly coalesce into heartrending and heartwarming beauty.” Tim Bano, The Stage

She participated in Paines Plough and Fiery Angel’s The Big Room, which is a scheme for 5 established playwrights to create work for larger audiences. Zoe holds a PhD at Newcastle University, where she also lectures on drama. Zoe took the M Phil in Playwriting at the University of Birmingham and was on the Royal Court Young Writers Programme. Her plays NATIVITIES and PETRIFICATION were developed and produced at Live Theatre in 2012 and 2016 respectively. In TV, Zoe is the first recipient of the ScreenSkills New Writer’s Award.

OUT OF WATER
Commissioned by RSC and Orange Tree Theatre
Director Guy Jones
Finalist in the 2020 Susan Smith Blackburn Prize. Shortlisted for the Charles Wintour Award for Most Promising Playwright at the Evening Standard Awards 2019. Nominated for the ‘Best New Production of a Play’ Award in the Broadway World UK Awards.

Call Jonathan to discuss Zoe or other Writers