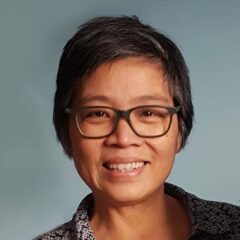 Candy Gourlay is a London based author and journalist originally from the Philippines.

Candy’s most recent novel, Bone Talk, was published in August 2018 by David Fickling Books and was shortlisted for the Costa Children’s Book Award.

Her first two novels, Tall Story and Shine, were both published by David Fickling Books in 2011 and 2014 respectively. Tall Story was listed for 13 prizes, including the Carnegie Medal, the Blue Peter and the Waterstones Prize. Shine was longlisted for the Guardian Children’s Fiction Prize.

Candy’s first picture book, Is It a Mermaid?, published in April 2018 and has been nominated for the Kate Greenaway Medal. It was published in the UK and the US by Otter-Barry Books.

Call Hilary to discuss Candy or other Authors