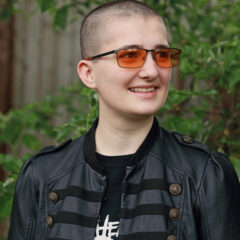 Finn Longman is a queer, nonbinary writer, originally from London.

They have a BA in Anglo-Saxon, Norse and Celtic from the University of Cambridge, and have held a variety of book-related jobs in schools and public libraries – and most recently as a bookseller for Waterstones and a graduate trainee librarian at Christ’s College Cambridge.

They currently live in Cork, where they are studying for an MA in Early and Medieval Irish. They’re also a dancer, Quaker, and connoisseur of extremely niche memes about medieval literature.

Finn’s debut YA novel, The Butterfly Assassin, will be published by Simon & Schuster in May 2022 with a sequel to follow in 2023.

Call Jessica to discuss Finn or other Authors