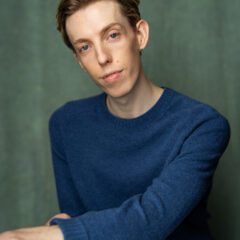 Harry Trevaldwyn is an actor, comedian and writer.

Harry’s sketch work has garnered widespread praise and has been shortlisted for several awards. Harry is currently developing two original longform shows for television with two prestigious production companies. He recently wrote and starred in a series of original sketches for ITV. Harry’s comedy blap BILLI is available on YouTube and Channel 4.

As an actor, Harry is best known for his roles as Ollie Rogers in Amazon’s TEN PERCENT, Gunther in Judd Apatow’s THE BUBBLE and Dartmouth in Netflix’s THE KING. He has worked with the Soho Theatre, Bristol Old Vic and the Bloomsbury Theatre.

He is represented by Isaac Storm at United Agents for his acting and screenwriting.

Harry has recently signed with The Agency as an author. He is currently writing a YA novel.

Call Jessica to discuss Harry or other Authors