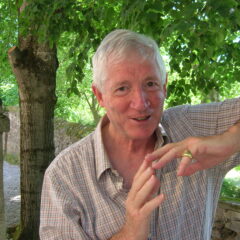 Kevin Crossley-Holland is a Carnegie Medal and Guardian Children’s Fiction Prize winning author best known for his Arthur trilogy (The Seeing Stone, At The Crossing Places and King of the Middle March) published by Orion, which have been translated into 25 languages and sold over 2 million copies.

He is the author of the classic retelling of Beowulf and The Penguin Book of Norse Myths and is a well-known poet and Anglo-Saxon translator. Heartsong, a story of an orphan tutored by Vivaldi in Venice, was published by Orchard.

‘Poem, Story and Scape in the Work of Kevin Crossley-Holland’ opens in the Stanley & Audrey Burton Gallery on 29th March until mid-August 2022 and exhibits stories and spaces which have inspired this prolific author.

Call Hilary to discuss Kevin or other Authors

Call Jessica to discuss Kevin or other Authors