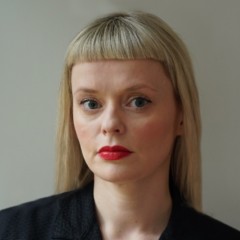 From Edinburgh, Lucy graduated from the University of Warwick with a BA in Creative Writing in 2005 before moving to Shanghai. She lived there until 2010, writing, directing, and producing short films, commercials and television dramas as well as learning Mandarin.

She then studied Film Directing at Columbia University’s MFA Programme in New York. Her short films have screened at numerous international festivals and her debut novel, Shanghai Passenger, was published by Blue Mark Books in 2015.

Lucy currently leads the Screenwriting course on the University of Warwick’s Creative Writing Programme, blogs for Little White Lies about filmmaking and is in active development on a number of feature and television projects. Lucy’s debut feature film BODY OF WATER was commissioned by Film London for their Microwave programme with support from BBC Films and the BFI, and stars Sian Brooke and Amanda Burton. It will premiere at Glasgow Film Festival 2020.

THE SPACE IN BETWEEN
Short
Writer-Director
Screenings: Whitechapel Gallery and Aesthetica Film Festival

SO IT GOES
2011
Short
Writer/Producer

Lucy is the Screenwriting Fellow on the Warwick University Writing Programme and blogs for Little White Lies on the subject of film-making.

Call Ian to discuss Lucy or other Directors & Writers

Call Nicola to discuss Lucy or other Directors & Writers