Polly Faber discusses her first book and collaboration with Clara Vulliamy in this extract from her blog.

“When Clara and I were first discussing what we might make a book together about, we went in search of a hero to the zoo. We wanted to find a previously unsung animal. A perhaps less than familiar animal. We are both very fond of stories about bears and rabbits and elephants and cats and so on but it seemed to us both that they might have had rather more than their fair share of moments in the spotlight. That it might be someone else’s turn.

We had an inkling of who that someone might be. The fact that at first they were very difficult to track down only added to the excitement. A rather shy animal then?

And then!- a tantalising glimpse as somebody came to enjoy the afternoon sun-

And we fell in love. A love only enhanced by the fact that so many passers by did not seem toquite know what they were looking at (my sneaky lean against the information board may not have helped): “It’s an elephant!” “It’s an aardvark!” “It’s an anteater!”. My favourite was the extremely confident man who identified it to his trusting girlfriend as “an enchillada”. But the vast majority were pretty sure they were looking at a strange variant of a pig. 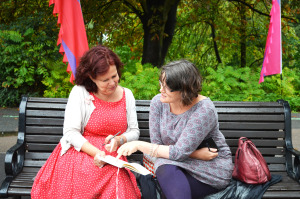 Yes- today is World Tapir Day and I am proudly declaring myself as Team Tapir Forever. I have a dream that one day I’ll go to the zoo and everyone will know exactly what they are, and that Clara and I will have helped in a small way to bring that about.”

Polly Faber and Clara Vulliamy are currently working on a brand new series of books to be formally announced soon. This extract was taken from Polly’s blog. Head over there to read the full post and get a sneak peak of what Polly and Clara have been working on together.  To see more of Clara’s work, head to her website.

You can keep up with them on Twitter – @pollylwh and @claravulliamy – and join in the tapir conversation using #teamtapir.