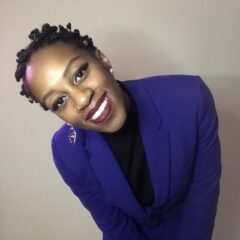 Abena is a multi-award-winning writer-director with experience working on funded short films for Sky Arts, Creative England, Disney UK and the NFTS. Her 2018 short film, Ladies Day, has screened at some of the most prestigious festivals in the UK and internationally including Outfest LA, Encounters and Raindance. She is a BFI Flare mentee, mentored by Lizzie Francke, and an alumnus of the NFTS Directors Workshop. Alongside BFI Network and The Showroom Cinema she has curated a programme of short films by rising black British filmmakers called New Black Voices. The programme celebrates Black History Month 2019 and a selection of work from some of the most exciting young black British filmmakers working today, of which she is one. Abena is currently writing episodes on a YA show for Hulu, as well as a short play for the Hope Mill Theatre and a short episode for an online series for Channel 4/ The Cornershop.

Call Nicola to discuss Abena or other Directors & Writers