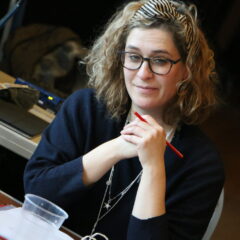 Charlotte is a stage director specialising in straight theatre, musicals, site-specific pieces, and political theatre. She has opened THE WICKER HUSBAND at the Watermill Theatre – a new musical by Rhys Jennings (book) and Darren Clark (music and lyrics), which won the inaugural MTI Stiles + Drewe Mentorship Award.

After THE WICKER HUSBAND Charlotte will direct a new musical adaptation of INDECENT PROPOSAL at the Southwark Playhouse in October. Michael Conley provides the book and lyrics and Dylan Schlosberg the music.

Also in development is ON HOSTILE GROUND with Juliet Gilkes Romero (book), Michael Henry (music) and Darren Clark, which is featured at BEAM 2020. It has been supported by Royal & Derngate, Northampton and China Plate in partnership with Mercury Musical Developments and Musical Theatre Network.

She is also developing a state of the nation play with award winning playwright Owen McCafferty and a new dance project with Metal Rabbit Productions and Corey Baker.

After graduating with first-class honours for Drama at the University of Manchester and training at Augusto Boal’s Centre of the Theatre of the Oppressed in Rio de Janeiro, Charlotte’s career started at the Donmar Warehouse, where she was the Resident Assistant Director between 2004-2005. At the Donmar she directed KISS OF THE SPIDERWOMAN and LOWER NINTH. Charlotte was also associate director on FROST/NIXON to Michael Grandage and PIAF to Jamie Lloyd for both the Donmar and West End transfers at the Gielgud and Vaudeville respectively.

Charlotte went on to establish herself with shows at theatres including the Tricycle, the Trafalgar Studios and the Sheffield Crucible. In 2012 she directed BEASTS & BEAUTIES, eight fairytales adapted by Poet Laureate Carol Ann Duffy and dramatized by Tim Supple and Melly Still in December 2012 at the Royal Welsh College of Music and Drama. That year also saw her touring THE INCREDIBLE DOCTOR GUTTMAN for Karen Simpson Productions. Highlights of the following year included TITANIC, a new play by Owen McCafferty at new Metropolitan Arts Centre in Belfast, and SUNSET BABY by Dominique Morisseau at the Gate Theatre – where she is an Associate Artist.

In 2015 her production of THE RETURN OF THE SOLDIER played at The Jermyn Street Theatre in September. A new musical adapted from Rebecca West’s novel, it received glowing notices, including 4 stars from The Times. The production was later revived at the Hope Mill Theatre in Manchester and New Wolsey in Ipswich for a run in 2018. She also directed a new production of VENICE PRESERV’D, a site specific piece in a new waterfront space in Deptford, London, adapted by Owen McCafferty from the Thomas Otway play. The show is produced by The Spectators’ Guild and featured, alongside the play itself, a Venetian carnival and a commedia del’arte. In the same year she directed two of Secret Cinema’s grand-scale sell-out live theatrical-cinematic experiences, BRAZIL and CASABLANCA.

Last year she directed Alan Bennett’s TALKING HEADS for the Gala Theatre Durham. The show played to packed houses and enthusiastic notices. She also directed the inaugural production at the Chiswick Playhouse (previously the Tabard), I LOVE YOU, YOU’RE PERFECT, NOW CHANGE.

She co-wrote the synopsis for Christopher Wheeldon’s new ballet Strapless for the Royal Opera House.

Copyright The Agency (London) Ltd. – 2021
Not to be reproduced in any form without permission of the Copyright holder.

Call Jonathan to discuss Charlotte or other Directors