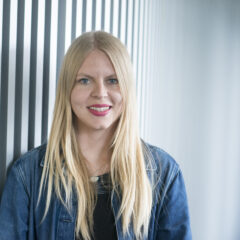 Emily is a UK-based Writer, with a strong interest in international co-productions. After two years of working in Europe as a Development Executive, and thirteen years of TV/Film industry experience in total, Emily made the leap into full-time writing towards the close of 2019.

So far this year, Emily is working on two contemporary, international projects as a Staff Writer: NEVERLAND and LAYOVER – both for Windlight Pictures (Germany).

In 2021, Emily and Lara Barbier adapted a YA romance-fantasy novel into a TV Movie for Bavaria Fiction (Germany), whilst partnered with a streamer platform.

Emily also worked as a Staff Writer on a historical project, AGE OF QUEENS for Readymade Films (Germany), now in development with TNT/HBO.

Emily’s own original project, THE BOOK-CLUB was commissioned for development by Audible (Germany)

Emily and Ottilie Wilford have co-written an TV-series adaptation of Karen Gregory’s YA novel COUNTLESS – and, alongside Dan Sefton at Seven Seas Films (UK) and Black Sheep Films (France), the team are now pitching the project.

In addition to her industry work, Emily is completing an MA in Writing for Stage and Broadcast, at the Royal Central School of Speech and Drama.

In 2020, Emily was shortlisted as one of the final 4% for the Red Planet Prize 2020 (UK), was chosen as one of eight European writers to partake in Canal+ Cannes Series Institute (France), and undertook a Staff Writer’s role for a Writers’ Room organised by Federation (France).

After the completion of Serial Eyes in 2017 (https://serial-eyes.com), Emily moved to Munich to work at Bavaria Fiction as an in-house Writer/Development Executive. During her two years there, Emily was involved in Writers’ Rooms for: Season 1/2 of German-French comedy DEUTSCH-LES-LANDES (Amazon France / Magenta TV), Season 1/2 of Finnish-German crime drama, ARCTIC CIRCLE (Elisa / ZDF), and Season 2 of international drama, DAS BOOT (Sky). In parallel, Emily signed a development deal with H+V (Munich) to write her own TV concept, LIFELINE.

In 2016, Emily worked as Writers’ Assistant to Jez Butterworth on Season 1 of BRITANNIA. It was Jez who inspired Emily to start writing her own material.

Emily graduated from Goldsmiths College (University of London) in 2011 with a first- class degree in BA (Hons) English and Comparative Literature, and has been working in the TV/Film industry ever since.

Call Jonathan to discuss Emily or other Writers