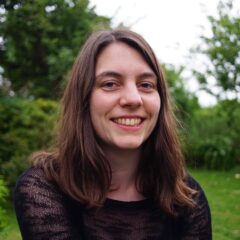 Ian Benson
Eva is a Scottish director and screenwriter. She graduated from the National Film and Television School in 2015, with her final year film Patriot premiering in the official competition at Cannes. In 2016, she was commissioned to write and direct Diagnosis by BBC Films and was named a Screen International ‘Star of Tomorrow’. Her short films have screened at festivals including BFI London Film Festival, Edinburgh, Telluride and the BAFTA New Talent Awards.
Eva’s first feature Perfect 10 premiered at the London Film Festival. It received a theatrical and online release across several territories in 2020, culminating in winning the BIFA Discovery Award in 2021. She is currently developing her next feature projects and an original tv series with Screen Scotland and Blue Bear Film and TV

Call Hannah to discuss Eva or other Directors & Writers

Call Ian to discuss Eva or other Directors & Writers