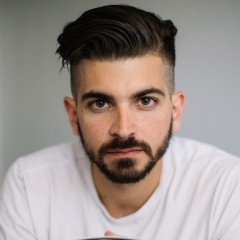 Jorge Thielen-Armand’s debut feature film LA SOLEDAD (2016) premiered at the 73rd Venice International Film Festival and garnered over a dozen awards across a 50+ festival run, notably Miami Film Festival’s Audience Award and the French Critics’ Union Prize at the Festival of Latin American Cinema in Biarritz. The Institute of Contemporary Arts and MUBI released the film theatrically in the UK, where it received praise from critics at The Guardian, Little White Lies, among others.

Jorge’s second feature LA FORTALEZA premiered in competition for the prestigious Tiger Award at the International Film Festival Rotterdam 2020. It was awarded the Jury Prize at Festival Biarritz Amérique Latine.

Jorge is currntly in development with his third feature LA CERCANÍA with In Vivo Films and was selected to participate in the San Sebastian Co-Production Forum, and received development support from the Torino Film Lab.

Jorge is a Guggenheim Fellow, holds a Communication Studies BA from Concordia University, and is an alumnus of the Venice Biennale College, TIFF Talent Lab, and Berlinale Talents. In 2015, Jorge founded La Faena with Rodrigo Michelangeli, a production company dedicated to art-house films. They are currently developing their second feature, The Return of Mr. Roque Thielen to the Island of Akare-Merú, which received the ARTE France Cinema International Prize at BAFICI’s 2017 Buenos Aires Lab and has been supported by the Tribeca Film Institute, TIFF Writers’ Studio, and Ibermedia.

He lives between Rome and Caracas.

Call Hannah to discuss Jorge or other Directors & Writers